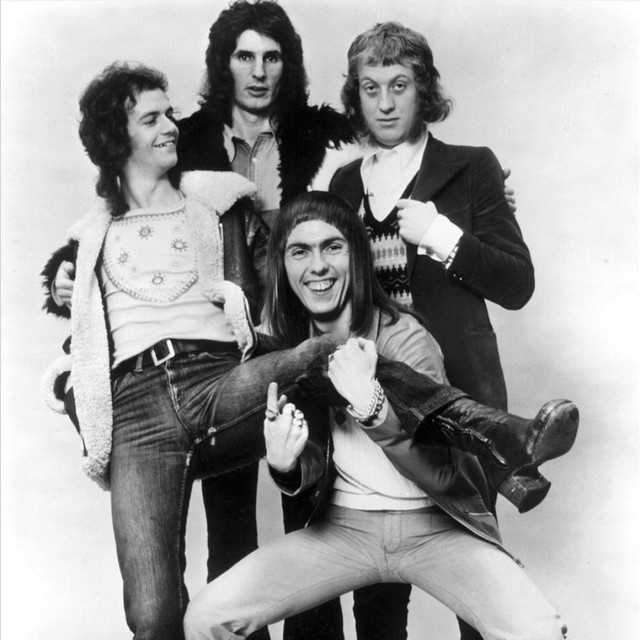 Slade are an English rock band formed in Wolverhampton in 1966. They rose to prominence during the glam rock era in the early 1970s, achieving 17 consecutive top 20 hits and six number ones on the UK Singles Chart. The British Hit Singles & Albums names them the most successful British group of the 1970s based on sales of singles. They were the first act to have three singles enter the charts at number one; all six of the band's chart-toppers were penned by Noddy Holder and Jim Lea. As of 2006, total UK sales stand at 6,520,171, and their best-selling single, "Merry Xmas Everybody", has sold in excess of one million copies. According to the 1999 BBC documentary It's Slade, the band have sold over 50 million records worldwide.Following an unsuccessful move to the U.S. in 1975, Slade's popularity in the UK waned, but was unexpectedly revived in 1980 when they were last-minute replacements for Ozzy Osbourne at the Reading Rock Festival. The band later acknowledged this to have been one of the highlights of their career. The original line-up split in 1992, but reformed later in the year as Slade II. The band have continued, with a number of line-up changes, to the present day. They have also shortened the group name back to Slade.

The two industry veterans will help SoundCloud focus its efforts on supporting creators at all points of their careers.

"I know it’s been pretty quiet on the band front for a long time but I want to let everyone know I’m stepping down from The Fray," the frontman wrote.

"I think we’d probably all have to go in on a coach each" The post Noddy Holder wants original Slade line-up to reunite for Glastonbury appeared first on NME.

The Bangin' Man (Live at The New Victoria)

Till Deaf Do Us Part (Expanded)

We'll Bring the House Down (Expanded)

Whatever Happened to Slade (Expanded)