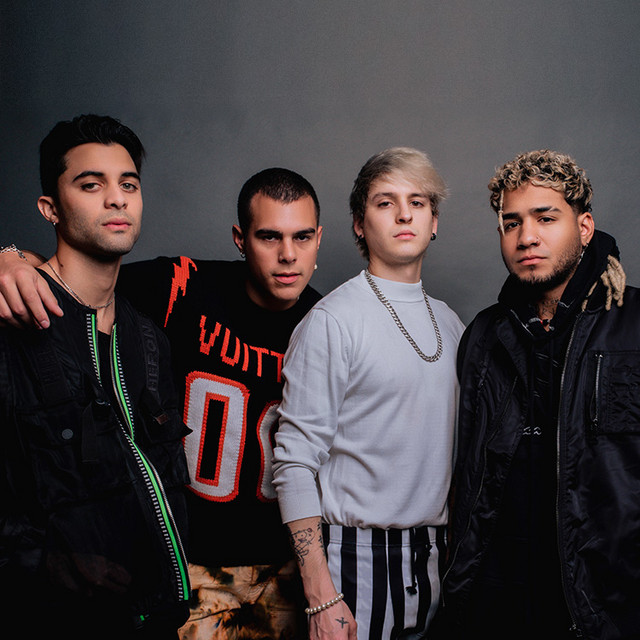 CNCO is a Latin American boy band based in Miami, Florida. The group consists of Richard Camacho, Erick Brian Colón, Christopher Vélez and Zabdiel De Jesús; former member Joel Pimentel departed the band in May 2021. They won a five-year recording contract with Sony Music Latin after becoming the winning competitors of the first season of La Banda. The band toured with Ricky Martin. Their debut and second singles "Tan Fácil" and "Quisiera", charted well soon after their debut. They released their first album, Primera Cita on August 26, 2016, which included the hit "Reggaetón Lento (Bailemos)".The group released their self-titled second studio album, on April 6, 2018, which included the singles "Mamita" and "Se Vuelve Loca". Their debut EP Que Quiénes Somos, containing the singles "De Cero" and "Pegao" featuring Manuel Turizo, was released on October 11, 2019. Both albums debuted at number one on the Billboard Top Latin Albums and the top 40 on the Billboard 200, while the EP debuted within the top 15 of the former chart.

In 2020, they began the era of their album Déjà Vu, a cover album of Latin pop classics, with three singles released from November to December. On February 5, 2021, the band released the LP. The album was released preceded by the fourth single and accompanied by the fifth on its release day.

On July 21, 2022, the band announced that they would be breaking up to focus on their solo careers, but would continue as a group for another year and a half.

"We always thought that if we split, it had to be natural, and that’s how it happened," said band member Zabdiel de Jesus

In an exclusive interview with Billboard News, CNCO talks about their decision to break up and what’s next for the members.

CNCO Is Breaking Up After Nearly 7 Years: ‘We’re Ready to Try New Things’

Billboard caught up with the artists exclusively backstage.

CNCO was among a wave of artists that took the stage at the awards show, held at the Coliseo de Puerto Rico.

The Black Eyed Peas Send a Message of Solidarity With ‘Where Is the Love?’ at 2022 Latin AMAs

The Black Eyed Peas were joined by other Latin acts such as CNCO, Ozuna and Ukrainian artist NK.

Billboard caught up with the artists exclusively at the celebrity lounge backstage.

The program is slated to premiere exclusively on Disney+ in Latin America later this year.

We're "pushing ourselves to create everlasting memories for our fans," CNCO tells Rolling Stone about their new era

“This ain’t a concert. We’re just hanging out,” Kravitz said at the private performance, attended by Leonardo DiCaprio and CNCO.

Alex Rose and CNCO have joined forces on the new single “Pa’ Que Guaye,” and the music video premieres exclusively on Billboard.

CNCO is marking the start of a new era as a four-piece band with a new single titled "To'a La Noche" set to drop July 22, Billboard can confirm.

From Karol G to CNCO, here are all the winners at the 2021 Heat Latin Music Awards.

Life After Joel Pimentel: Everything We Know About CNCO’s New Era

From what career moves Joel Pimentel will pursue to what CNCO's doing next, here's everything CNCOwners need to know about the group's new era.

CNCO announced that "after five and a half years together," Joel Pimentel is leaving the group. Here's how fans reacted.

CNCO’s Joel Pimentel Is Leaving the Band: ‘We Are and Will Always Be Brothers’

CNCO's Joel Pimentel is moving on to a new chapter of his career.