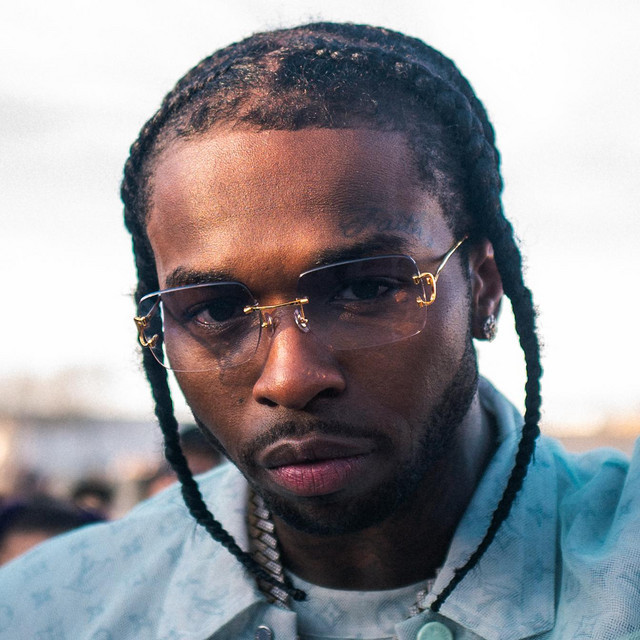 Bashar Barakah Jackson (July 20, 1999 – February 19, 2020), known professionally as Pop Smoke, was an American rapper, singer, and songwriter. He is considered by many to be the face of Brooklyn drill. Born and raised in Canarsie, Brooklyn, Pop Smoke began his musical career in late 2018 with his debut single "MPR (Panic Part 3 Remix)". Pop Smoke rose to fame with the release of his breakout singles "Welcome to the Party" and "Dior" in 2019. He often collaborated with UK drill artists and producers, who employed more minimal and aggressive instrumentation than drill artists from Chicago.

Following his rise to fame, record producer Rico Beats introduced Pop Smoke to Steven Victor in April 2019. Victor would later have Pop Smoke sign a recording contract with Victor Victor Worldwide and Republic Records. He released his debut mixtape Meet the Woo in July 2019. His second mixtape, Meet the Woo 2, was released on February 7, 2020, and debuted at number seven on the Billboard 200, becoming the rapper's first top-10 project in the United States.

Less than two weeks after the release of the mixtape, Pop Smoke was murdered during a home invasion in Los Angeles. New York rapper 50 Cent was the executive producer of his posthumous debut studio album, Shoot for the Stars, Aim for the Moon, released on July 3, 2020. The album debuted at number one on the Billboard 200 and all 19 tracks from the album were charted on the Billboard Hot 100. The album also spawned a string of international top-10 singles, including "For the Night" (featuring DaBaby and Lil Baby) and "What You Know Bout Love". A year later, Republic Records released Pop Smoke's second studio album, Faith, on July 16, 2021.

Bobby Shmurda joined DJ Akademiks on his 'Off the Record' podcast and was asked if he'd rather have a feature from Jay-Z or the late Pop Smoke.

In a new clip from DJ Akademiks’ 'Off the Record'​​​​​​​ podcast, 6ix9ine said that late rappers Pop Smoke, King Von, and Nipsey Hussle were “caught lacking."

French Montana: ‘Get Hip or Get Left With the Dinosaurs’

The rapper on his new album, why New York is the Mecca of hip-hop and almost seeing his friend Pop Smoke the night he died

Corey Walker allegedly insisted a flower vase be used as opposed to shooting anyone The post Man charged with Pop Smoke’s murder says he told shooter not to fire gun appeared first on NME.

Corey Walker allegedly insisted that “if it became necessary for the suspects to defend themselves, they should use a flower vase rather than shoot someone,” according to lawyer

The rapper was shot and killed in Los Angeles in February 2020 The post Pop Smoke’s gravesite at Brooklyn cemetery vandalised appeared first on NME.

Pop Smoke’s Grave Vandalized, Casket May Have Been Dragged Out

Dua Lipa stars in the newly released music video for Pop Smoke's track, "Demeanor." The pop singer is featured on the song, which debuted on his second posthumously released album, Faith.

"Thank you to Pop’s family for having me on this song" The post Watch the lavish video for Pop Smoke and Dua Lipa’s ‘Demeanor’ appeared first on NME.

Pop Smoke's Most Essential Songs You Need to Hear

It's the late rapper's second US number one The post Pop Smoke’s posthumous ‘Faith’ album debuts at number one in the US appeared first on NME.

Pop Smoke’s ‘Faith’ Debuts at No. 1 on Billboard 200 Albums Chart

Pop Smoke’s second posthumous album, 'Faith,' debuts at No. 1 on the Billboard 200 chart, garnering the rapper his second leader.

"We turning the pain into champagne every day" The post Listen to four new Pop Smoke songs, released to mark his 22nd birthday appeared first on NME.

The rapper's second posthumous album has some dazzling moments, but ultimately feels like business as usual for an audience whose attention may be elsewhere.

Another one? Continue reading…

You cannot say Pop and forget the Smoke. Continue reading…

AP (Music from the film Boogie)

Shoot For The Stars Aim For The Moon (Deluxe)

Shoot For The Stars Aim For The Moon

Welcome To The Party (Remix)