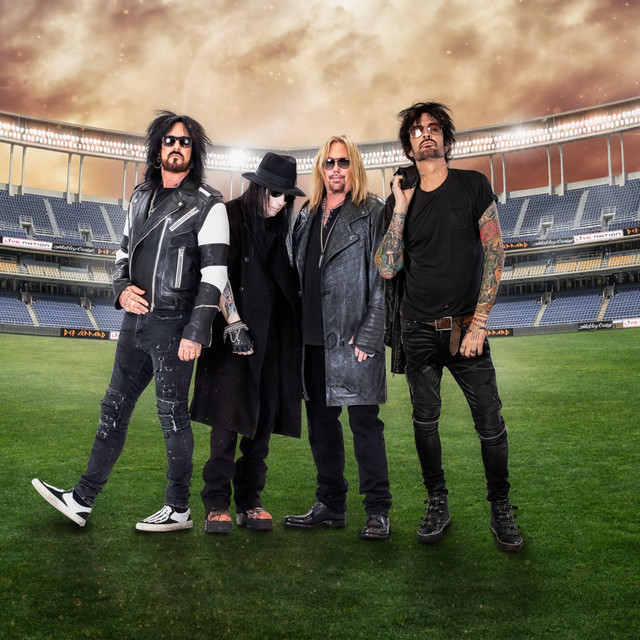 Mötley Crüe is an American heavy metal band formed in Los Angeles in 1981. The group was founded by bassist Nikki Sixx, drummer Tommy Lee, lead guitarist Mick Mars and lead singer Vince Neil. Mötley Crüe has sold over 100 million albums worldwide. They have also achieved seven platinum or multi-platinum certifications, nine Top 10 albums on the Billboard 200 chart (including 1989's Dr. Feelgood, which is Mötley Crüe's only album to reach number one), twenty-two Top 40 mainstream rock hits, and six Top 20 pop singles. The band experienced several short-term lineup changes in the 1990s and 2000s; these included the introduction of vocalist John Corabi (who was Neil's replacement from 1992 to 1996) and drummers Randy Castillo and Samantha Maloney, both of whom filled in for Lee following his departure from Mötley Crüe in 1999; he returned to the band in 2004, and their current lineup has been the same as the original since then.

The members of Mötley Crüe have often been noted for their hedonistic lifestyles and the androgynous personae they maintained. Following the hard rock and heavy metal origins on the band's first two albums, Too Fast for Love (1981) and Shout at the Devil (1983), the release of its third album Theatre of Pain (1985) saw Mötley Crüe joining the first wave of glam metal. The band has also been known for their elaborate live performances, which feature flame thrower guitars, roller coaster drum kits, and heavy use of pyrotechnics(fireworks) (including lighting Sixx on fire). Mötley Crüe's most recent studio album, Saints of Los Angeles, was released on June 24, 2008. What was planned to be the band's final show took place on New Year's Eve, December 31, 2015. The concert was filmed for a theatrical and Blu-ray release in 2016.After two-and-a-half years of inactivity, Neil announced in September 2018 that Mötley Crüe had reunited and was working on new material. On March 22, 2019, the band released four new songs on the soundtrack for its Netflix biopic The Dirt, based on the band's New York Times best-selling autobiography of the same name. The soundtrack went to number one on the iTunes All Genres Album Chart, number 3 on the Billboard Top Album and Digital Album sales charts, number 10 on the Billboard 200, and Top 10 worldwide. The autobiography returned to New York Times Best Seller list at number 6 on Nonfiction Print and number 8 on Nonfiction Combined Print & E-Book. Mötley Crüe is currently scheduled to embark on its first major tour in seven years in the summer and fall of 2022, co-headlining a North American tour with Def Leppard.

The Mötley Crüe singer crashed into another car while drunk in 1984, resulting in the death of Hanoi Rocks drummer Nicholas Dingley The post Hanoi Rocks guitarist says Vince Neil never apologised for death of the band’s drummer appeared first on NME.

He sustained the injury falling down some stairs while on vacation The post Tommy Lee plays first full Mötley Crüe show since breaking his ribs appeared first on NME.

Drummer Tommy Lee also had to be replaced half way through the band's set due to an ongoing injury The post Mötley Crüe bring out Machine Gun Kelly as US tour begins in Atlanta appeared first on NME.

Don't expect the same ol' situation for upcoming Crüe reissues. "In the next few years we want to be celebrating every single one of [the band's] albums in a spectacular fashion," says a BMG exec.

The FX series sticks closer to the historical record than recent efforts by Mötley Crüe, Queen, and Elton John, but it still veers away from reality at certain points

Frontman Oli Sykes has spoken about how the band were portrayed by the media at the beginning of their career The post Bring Me The Horizon recall being branded a “Mötley Crüe-esque bunch of fucking dickheads” appeared first on NME.

"Mötley Crüe has no connection or affiliation with this play whatsoever" The post Nikki Sixx distances Mötley Crüe from unauthorised play appeared first on NME.

They're about to start a three-year stadium tour with Poison and Mötley Crüe, but just don't call them hair metal

Nikki Sixx Talks Invitation to Join ‘American Idol’ For Sunset Strip Episode: ‘I Did Not Hesitate’

Sixx recently called Pearl Jam "one of the most boring bands in history" after Vedder dismissed the hair metal group in an interview The post Eddie Vedder makes jab at Mötley Crüe during New Jersey concert appeared first on NME.

The Pearl Jam frontman recently spoke in an interview of how "vacuous" he found the eighties hair metal scene, singling out Mötley Crüe The post Nikki Sixx responds to Eddie Vedder’s criticism of Mötley Crüe: “It’s kind of a compliment, isn’t it?” appeared first on NME.

"Their extensive track record of success in rock made them the perfect home to continue preserving and growing our musical legacy," the band said The post Mötley Crüe sell catalogue to BMG for reported £110million appeared first on NME.

BMG has acquired Mötley Crüe‘s entire recorded music catalog in a deal that marks the company’s largest single-artist deal since its founding in 2008, it was announced Tuesday (Nov. 30). BMG’s global catalog team plans to work closely with the band and its management to re-promote the releases starting next year. “It feels amazing to […]

The heavy metallers have long held a reputation for being quite non-child-friendly with their numerous controversies The post Mötley Crüe bassist Nikki Sixx says he wants to release a children’s book in 2022 appeared first on NME.

Shout At The Devil (Demo)

1st Band On The Moon (Demo)

Shout At The Devil

Too Fast For Love