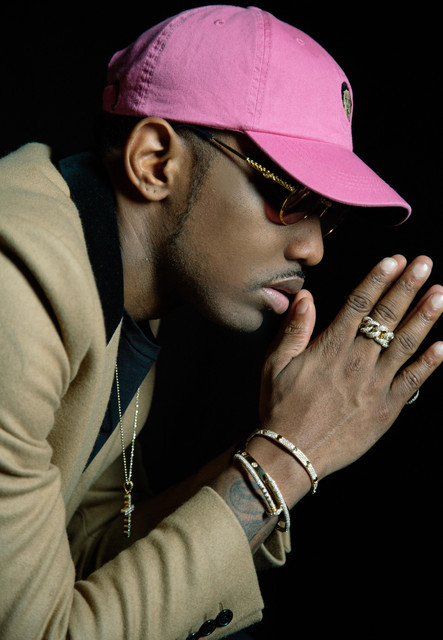 John David Jackson (born November 18, 1977), better known by his stage name Fabolous, is an American rapper. He first gained recognition while still a senior in high school, when he performed live on American music executive DJ Clue's radio show, then on Hot 97. Jackson subsequently signed to DJ Clue's Desert Storm imprint, and later secured a distribution deal with Elektra Records. Jackson gained prominence with his first release, Ghetto Fabolous (2001), which spawned the hit singles "Can't Deny It" (featuring Nate Dogg) and "Young'n (Holla Back)". His second release was 2003's Street Dreams, which was supported by two US top 10 singles, "Can't Let You Go" (featuring Lil' Mo) and "Into You" (featuring Tamia or Ashanti).

Including the aforementioned songs, Jackson's series of hit singles extended throughout the 2000s, including "Trade It All, Pt. 2" (featuring Diddy and Jagged Edge), "Breathe", "Make Me Better" (featuring Ne-Yo), "Baby Don't Go" (featuring T-Pain), "Throw It in the Bag" (featuring The-Dream) and "You Be Killin' Em". He is also known for his appearances on several R&B singles, including "Superwoman Pt. II" by Lil' Mo, "Shawty Is a 10" by The-Dream, "Addiction" by Ryan Leslie, "She Got Her Own" by Jamie Foxx, "Say Aah" by Trey Songz, among others.

In 2004, Jackson signed to Atlantic Records (another subsidiary of Warner Music Group), after leaving Elektra, where he released Real Talk, his first and only album under Atlantic. In 2006, Jackson was let out of his contract with Atlantic and officially signed with Def Jam Recordings (owned by Warner competitor Universal Music Group). Also in 2006, Jackson founded his own record label, Street Family Records. In 2007, he released From Nothin' to Somethin', under Def Jam. In 2009, he released his fifth album, Loso's Way. Throughout the years Jackson has amassed a number of self-released mixtapes, including several installments of his highly acclaimed There Is No Competition series and The S.O.U.L. Tape series, respectively. He released his sixth album, The Young OG Project, in 2014.

French Montana assists Fabolous for his new song and video "Say Less," which was shot at the Sei Less Asian-fusion restaurant in New York City.

The show will explore iconic albums alongside the artists that created them, including The Game, French Montana and Fabolous.

The track appears on the deluxe edition of her album 'Good Morning Gorgeous.'

Mary J. Blige, Fabolous Hit the Tropics in ‘Come See About Me’ Video

Fabolous Shows Off the ‘Struggle Meal’ He Cooked Up: 'Don’t Look That Bad'

Across a series of posts he made to social media, 44-year-old Brooklyn rapper Fabolous shared what his version of a “struggle meal” looks like.

Fabolous and Jim Jones teamed up to drop the music video for "Coke Zero," which utilizes the beat for Pusha-T's 'It’s Almost Dry' track "Diet Coke."

VRDGO channel Fabolous and Nate Dogg on new house cut, ‘Ride With Me’

VRDGO take on Nate Dogg and Fabolous' 2001 hit 'Cant Deny It,' on their latest single. Listen to the tune here. The post VRDGO channel Fabolous and Nate Dogg on new house cut, ‘Ride With Me’ appeared first on Dancing Astronaut.

VRDGO channel Fabolous and Nate Dogg on new house cut, ‘Ride With Me’

VRDGO take on Nate Dogg and Fabolous' 2001 hit 'Cant Deny It,' on their latest single. Listen to the tune here. The post VRDGO channel Fabolous and Nate Dogg on new house cut, ‘Ride With Me’ appeared first on Dancing Astronaut.

Fabolous Shares Video of His Young Son Freestyling: 'Freestyles Run in the Family'

Fabolous took to Instagram to share a video of his 6-year-old son Jonas freestyling in the car before voicing his approval over his stellar showing.

2 Chainz Catches Fabolous Getting His Nails Done While at Dinner

Fabolous Is a Better Rapper Than Andre 3000, According to Reason

A collaboration with Fabolous and Dave East for Dogg's latest album, ‘The Algorithm’ The post Snoop Dogg recognises Black creators in music video for ‘Make Some Money’ appeared first on NME.

Into You (Stripped Version)

When The North and South Collide Part 2

There Is No Competition 2

There Is No Competition 2: The Grieving Music Mixtape

Throw It In The Bag

When the North & South Collide Part 2

From Nothin' To Somethin'

From Nothin' To Somethin' (Explicit Version)

Make U Mine (feat. Mike Shorey)