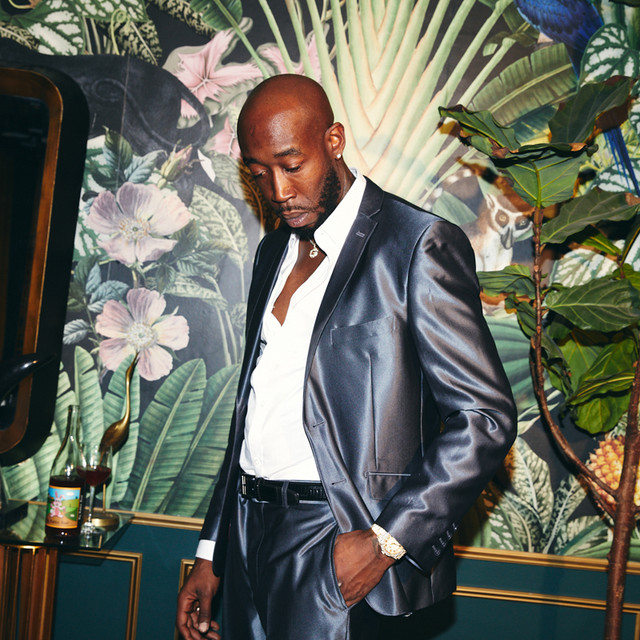 Fredrick Jamel Tipton (born June 14, 1982), better known by his stage name Freddie Gibbs, is an American rapper from Gary, Indiana. After initially being signed to Interscope Records in 2006, Gibbs recorded his debut studio album under the label. However, he was eventually dropped and the album was cancelled. Gibbs later signed with Young Jeezy's CTE World and released a number of mixtapes through the label, including 2012's highly acclaimed Baby Face Killa.After leaving CTE in early 2013, Gibbs formed his own label, ESGN, which was also the name of his debut studio album released in June of that year. Since then, he has gone on to release four solo studio albums, as well as four collaborative albums, two with Madlib (as MadGibbs): Piñata (2014) and Bandana (2019), and two with The Alchemist: Fetti (2018) (also a collaboration with rapper Curren$y) and Alfredo (2020), the latter of which received a Grammy Award nomination for Best Rap Album at the 63rd Annual Grammy Awards.

Freddie Gibbs Is Down for a Tyler, the Creator Collab Project

Freddie spoke about the possibility during a new interview, revealing, "He’s like a little brother to me, but I look up to him at the same, too."

Jeezy on Nas Inspiring Him to Stay ‘Calm’ During Freddie Gibbs Beef: ‘I’ve Been on the Other Side of That’

Jeezy says Nas helped inspire him to squash his beef with Freddie Gibbs, whom he recently publicly reconciled with when they bumped into each other.

Freddie Gibbs Says There's Only 'Five Guys' Who Rap As Good As Him: 'My Track Record Speaks for Itself'

In an interview with Ebro Darden on Apple Music, Freddie Gibbs has proclaimed that there’s only five other rappers out right now as good as him.

In an appearance on 'The Breakfast Club,' Freddie Gibbs spoke about moving on from his beef with Jeezy and addressed that rumored fight with Benny the Butcher.

In a new interview, Freddie Gibbs recalls running into Jeezy at an airport and how the encounter resulted in a "beautiful" moment between the two.

Return of the Gangsta: Freddie Gibbs Talks ‘$oul $old $eparately' and Being 'One of a Kind'

Freddie Gibbs' new album plays like a sustained victory lap. The rapper talks to Complex about using adversity as fuel and treating this album as an experience.

Freddie Gibbs Has Made It To the Penthouse. Now What?

The street rap vet's latest '$oul $old $eparately' summarizes his journey to major-label success, but he still has room to expand.

The Best New Music This Week: Glorilla, Cardi B, Freddie Gibbs, and More

Ahead of the release of his long-awaited album 'Soul Sold Separately,' Freddie Gibbs has shared the James Blake-produced single “Dark Hearted.”

The Memphis rapper shared the cut on his 31st birthday Thursday. "Blow" comes less than a month after Moneybagg dropped "Too Much" with Freddie Gibbs.

As Freddie Gibbs prepares to drop a new album, the Indiana rapper stopped by Funkmaster Flex’s studio to spit a new freestyle over an Amerie classic.

Ahead of the release of his fifth studio album 'Soul Sold Separately,' Freddie Gibbs tapped Moneybagg Yo for his new single and video "Too Much."

Freddie Gibbs unloaded a flurry of shots toward Benny the Butcher on Instagram after the Buffalo rapper posted a video showing him cleaning his jewelry.

The event takes place in San Diego this November

Gibbs stars as a superstar rapper escaping the pressure of fame on a rural farm The post Watch Freddie Gibbs’ film debut in first trailer for ‘Down With The King’ appeared first on NME.

The film screened last fall as part of the Austin Film Festival, where it was selected as a Spotlight Film for its "exemplary filmmaking feats."

"It just feels good to be on 'MTV Raps,'" Freddie Gibbs said proudly. "I could've done 'Diddle, diddle, cat on the fiddle, in the middle' -- it didn't event matter."

Video appears to show Freddie Gibbs, who was in Buffalo, New York for his Space Rabbit Tour, getting into an altercation with a group people.

Too Much (feat. Moneybagg Yo)

Hate To Say It

Winter in America (From “Black History Always / Music For the Movement Vol. 2")

The Diamond Mine Sessions (Amazon Original) (with El Michels Affair)

What You Tryna Do?

You Only Live 2wice

Shadow of a Doubt

Fuckin' Up the Count - Single

The World Is My Ashtray

The Tonite Show with Freddie Gibbs & The Worlds Freshest