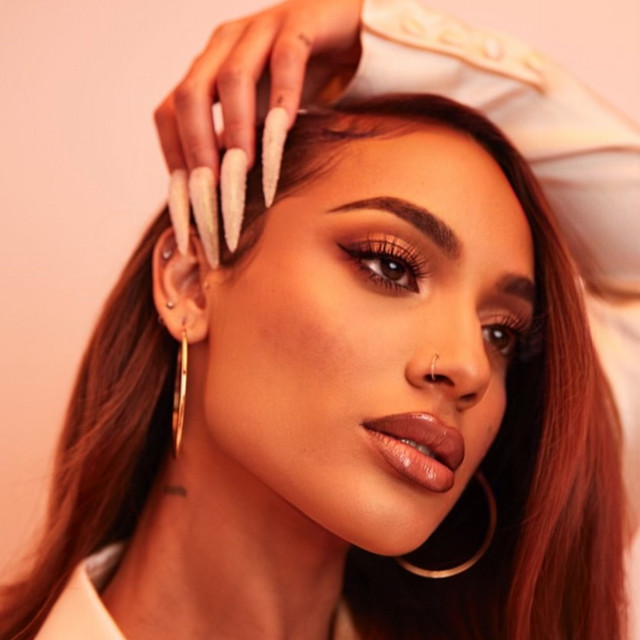 Danielle Leigh Curiel (born December 20, 1994), known professionally as DaniLeigh, is an American singer, songwriter, rapper, dancer, and choreographer. Initially appearing as a backup dancer, Curiel began her career by posting covers of popular songs on YouTube before moving to Los Angeles, where she began choreographing for other artists and dancing. She made a career breakthrough after working with Prince on the music video for his single "Breakfast Can Wait". DaniLeigh was signed to Def Jam Records in 2017, releasing mixtapes and singles starting that year.

DaniLeigh Drops New ‘My Side’ EP

Included on the new seven-track project from DaniLeigh, released Friday via Def Jam, are the recently released singles “Dead to Me” and “Heartbreaker.”

DaniLeigh's Brother Addresses Reactions to TikTok Video of Him Dancing With His Sister: 'No Weird Sh*t'

Brandon Bills addressed people who felt some type of way about a TikTok video of him and his sister DaniLeigh dancing to his song "BUM BUM."

DaBaby Calls Out DaniLeigh, Claims She's Not Being Honest About Why They Split Up: ‘You Was Stalkin’ My Baby Mama’

DaBaby took to Instagram on Tuesday to respond to DaniLeigh, who opened up about their past relationship in a recent interview with Angie Martinez.

DaniLeigh is moving on from her tumultuous relationship with DaBaby and focusing on her music.

DaniLeigh Reflects on 'Very Triggering' IG Live Fight With DaBaby, Says It Was ‘Very Bad Time’ in Her Life

In a new interview with Angie Martinez, singer and rapper DaniLeigh described her fight with her ex-boyfriend DaBaby on Instagram Live as “very triggering.”

The lawsuit that DaniLeigh’s brother, Brandon Bills, filed against DaBaby over their bowling alley fight has hit a major snag over his lack of cooperation.

Brandon Bills claims he was “physically and psychologically damaged," and that his injuries “are permanent in nature” in new complaint

No charges have been filed, nor have arrests been made after video emerged of the rapper and his entourage scuffling with Brandon Bills

DaBaby Under Investigation for Assault With a Deadly Weapon

DaBaby and DaniLeigh’s Brother Get Into Fight at Bowling Alley

DaniLeigh Charged With Assault After DaBaby Called the Cops

The incident between DaniLeigh and DaBaby apparently escalated. Continue reading…

DaBaby's tell-all follows the drama that unfolded between himself and DaniLeigh earlier this morning. Continue reading…

DaniLeigh Accuses DaBaby of Calling the Cops On Her

Things got heated between the two, who share a baby girl. Continue reading…

DaBaby Promotes Tour After Calling Cops on His Baby’s Mother

It's Just Us - Single