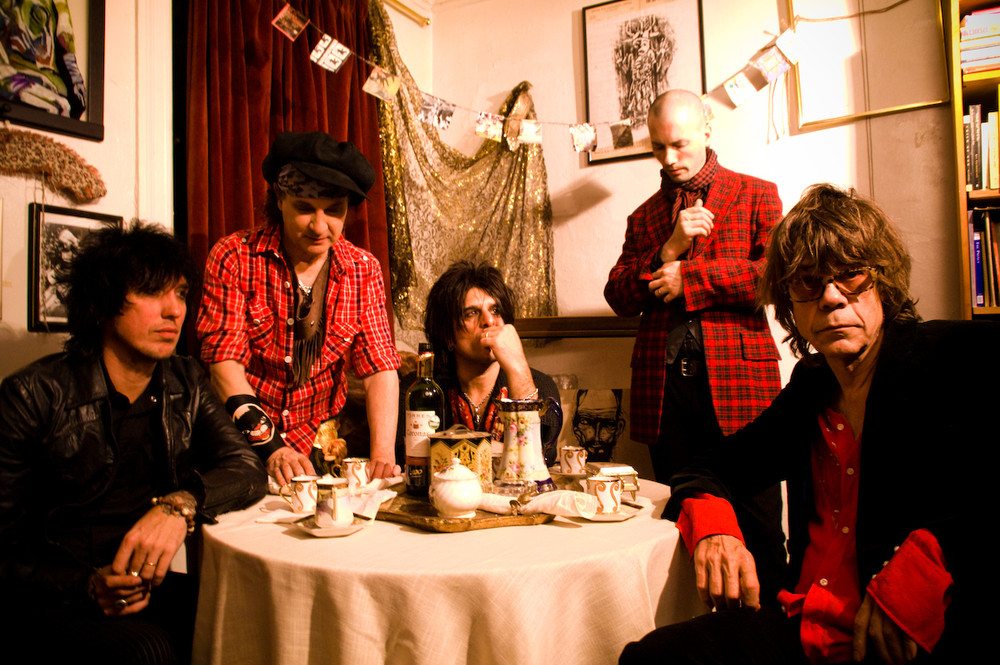 New York Dolls were an American rock band formed in New York City in 1971. Along with the Velvet Underground and the Stooges, they were one of the first bands of the early punk rock scenes. Although the band never achieved much commercial success and their original line-up fell apart quickly, the band's first two albums—New York Dolls (1973) and Too Much Too Soon (1974)—became among the most popular cult records in rock. The line-up at this time comprised vocalist David Johansen, guitarist Johnny Thunders, bassist Arthur Kane, guitarist and pianist Sylvain Sylvain and drummer Jerry Nolan; the latter two had replaced Rick Rivets and Billy Murcia, respectively, in 1972. On stage, they donned an androgynous wardrobe, wearing high heels, eccentric hats, satin, makeup, spandex, and dresses. Nolan described the group in 1974 as "the Dead End Kids of today".According to the Encyclopedia of Popular Music (1995), the New York Dolls predated the punk and glam metal movements and were "one of the most influential rock bands of the last 20 years". They influenced rock groups such as the Sex Pistols, Kiss, the Ramones, Guns N' Roses, the Damned, and the Smiths, whose frontman Morrissey organized a reunion show for the New York Dolls' surviving members in 2004. After reuniting, they recruited new musicians to tour and record. They released three more albums—One Day It Will Please Us to Remember Even This (2006), Cause I Sez So (2009) and Dancing Backward in High Heels (2011). Following a 2011 British tour with Alice Cooper, the band once again disbanded.

From Paris With Love (L.U.V)

Fool For You Baby

'Cause I Sez So

'Cause I Sez So (Digital Single)

One Day It Will Please Us To Remember Even This

The Return of the New York Dolls - Live From Royal Festival Hall, 2004

In Too Much Too Soon