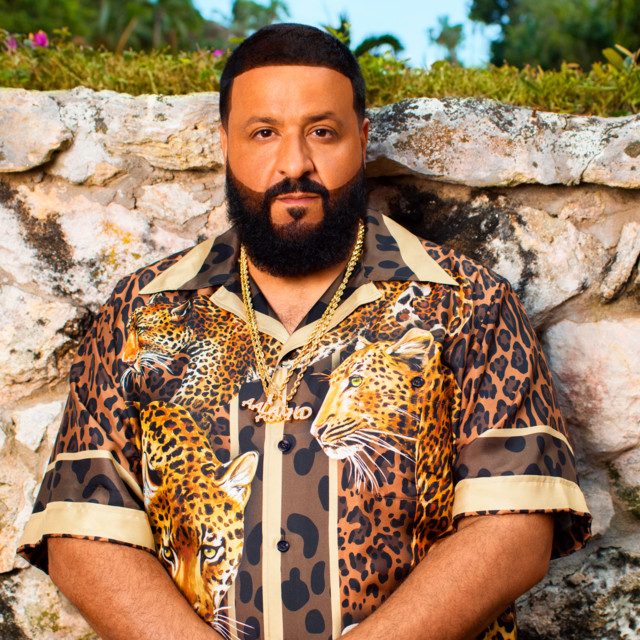 Khaled Mohammed Khaled (born November 26, 1975), known professionally as DJ Khaled, is an American DJ, record executive, author and record producer.Khaled first gained recognition as a radio host in the 1990s on the radio station 99 Jamz, and translated his popularity by working with Terror Squad as a DJ for their live performances. After gaining production credits on the group's material, Khaled released his debut studio album Listennn... the Album in 2006, which earned gold certification. He followed it with We the Best (2007), which contained the top 20 single "I'm So Hood". His subsequent two releases — We Global (2008) and Victory (2010) — were released after he founded the record label We the Best Music Group. Both albums charted in the top ten on the US Billboard 200, with the latter containing the single "All I Do Is Win", which was eventually certified triple platinum.

His fifth studio album We the Best Forever (2011) also saw similar commercial success, and helped bring Khaled to international prominence, as it featured the song "I'm on One", which was his first top ten hit. His sixth and seventh albums, Kiss the Ring (2012) and Suffering from Success (2013), charted in the top ten on the Billboard 200, and his eighth studio album, I Changed a Lot (2015), peaked at number 12. In 2015 and 2016, Khaled gained worldwide attention as a media personality, due to his activity on social media. This foresaw the release of his ninth studio album Major Key (2016), which gained critical and commercial success; it debuted at number one the Billboard 200, was certified gold, and received a Grammy nomination for Best Rap Album.

He released his tenth studio album, Grateful, in 2017, which contained the singles "I'm the One" and "Wild Thoughts", which charted at number one and number two on the Billboard Hot 100, respectively. The album debuted at number one on the Billboard 200, and was also certified platinum. His eleventh album, Father of Asahd, was released in 2019; it peaked at number two, and the song "Higher" won Best Rap/Sung Performance at the 62nd Annual Grammy Awards, Khaled's first Grammy award win. His eponymous twelfth album was released in 2021.

Outside of music, Khaled has gained success as a writer, with his book The Keys featuring on the New York Times Best Seller list. He has also featured as an actor, appearing in Spies in Disguise (2019) and Bad Boys for Life (2020).

The superstar party starter is working on his latest opus in the Bahamas and it looks like Drake, Future and Lil Baby are along for the ride.

Getting Back in the DJ Booth: DJ Rosegold Talks Spinning in Front of Obama, Bringing ‘Island Vibes’ to Her Sets & Wanting to Be the ‘Female DJ Khaled’

The Canadian-born, L.A.-based DJ/producer talks about manifesting her dream gigs and becoming the "female DJ Khaled" with her curated EPs.

DJ Khaled was escorted back to his seat by a security guard after he walked onto the court during Sunday's game between the Hawks and Heat and shot an airball.

The Complex Sneakers Podcast is co-hosted by Joe La Puma, Brendan Dunne, and Matt Welty. This week they talk about DJ Khaled's newly unveiled "We The Best" Air

For episode 118 of the Complex Sneakers Podcast, the guys talk about DJ Khaled’s new 'We The Best' Air Jordan 5 collection and other top-tier collabs.

"There’s only one Khaled," the record producer said in his speech.

Jay-Z, Diddy, and Fat Joe all stopped by to celebrate with DJ Khaled as he was honored with his very own star on the Hollywood Walk of Fame.

"We the best. It’s not just me, it's we" The post DJ Khaled receives star on Hollywood Walk of Fame with Jay-Z, Diddy and Fat Joe in attendance appeared first on NME.

The rapper's hit takes the top slot after its parent album release and a remix with Mariah Carey and DJ Khaled.

Follow along with the lyrics to Latto's high energy hit, featuring Mariah Carey and DJ Khaled.

Mariah Carey Teams Up With Latto on ‘Big Energy’ Remix: Listen to It Here

The sparkling track also features an assist from DJ Khaled.

Fresh off the release of her sophomore studio album '777,' Latto has recruited Mariah Carey and DJ Khaled for the remix to her hit single "Big Energy."

Stephanie Beatriz, who is featured on five songs on the 'Encanto' soundtrack, will also present.

Usher, DJ Khaled, Mary J. Blige and more will be participating in the All-Star Game festivities.

In the latest Social Rundown, DJ Khaled and Migos’ 2017 hit “Major Bag Alert” is the latest song to take over TikTok.

The NBA announced that DJ Khaled and friends are set to headline the State Farm All-Star Saturday Night performances.

DJ Khaled Wins Song of the Year for XXL Awards 2022

The pair linked up on the tracks 'Popstar' and 'Greece' last year The post DJ Khaled says he has another new collaboration with Drake on the way appeared first on NME.

WHERE YOU COME FROM (feat. Buju Banton, Capleton & Bounty Killer)

I Believe (feat. Demi Lovato) [As featured in the Walt Disney Pictures' "A WRINKLE IN TIME"]

I Changed A Lot (Deluxe)

I Wanna Be With You

Take It To The Head

Welcome To My Hood

We The Best Forever

All I Do Is Win (feat. T-Pain, Ludacris, Snoop Dogg & Rick Ross)