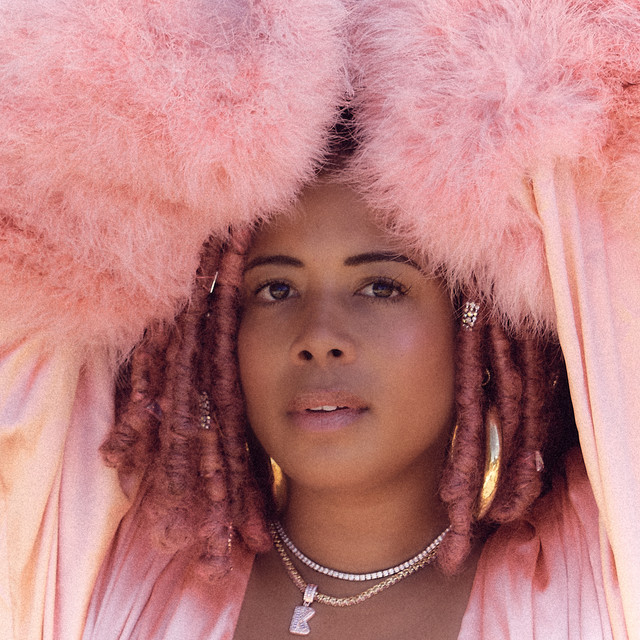 Kelis Rogers-Mora (; born August 21, 1979), known mononymously as Kelis, is an American singer. At age 14, she was admitted to New York's Fiorello H. LaGuardia High School of Music & Art and Performing Arts, where she learned to play the saxophone and won a spot in the Girls Choir of Harlem. After she graduated from high school in 1997, Kelis took on a variety of jobs before landing a backup vocal slot on an album track called "Fairytalez", released by the American hip hop group Gravediggaz. She then began working with music producers, Pharrell Williams and Chad Hugo, known as The Neptunes, which ultimately resulted in her being signed to Virgin Records in 1998.Kelis released her debut studio album Kaleidoscope with Virgin Records on December 7, 1999. Inspired by jazz and disco music from the 1970s, the album was a critical and international success. It spawned three singles: "Caught Out There", "Good Stuff", and "Get Along With You". The album reached number 43 in the United Kingdom while also becoming her first album to be certified gold. She left her label Virgin Records after its follow-up Wanderland (2001) received little sales attention and no U.S. release until 2019. In 2003, Kelis released her third studio album Tasty. The album produced the singles "Milkshake", "Trick Me", "Millionaire" (featuring André 3000), and "In Public" (featuring Nas). The album earned the singer commercial prominence. Her fourth album, Kelis Was Here (2006), contained by the lead single "Bossy" (featuring Too Short) and reached number 10 on the Billboard 200. Kelis took a hiatus from music after its release, venturing into culinary arts at Le Cordon Bleu. She later signed with will.i.am and began recording her fifth album. Her fifth studio album, Flesh Tone, was released on May 14, 2010. The album spawned four singles, including "Acapella" and "4th of July (Fireworks)", which were successful on the US Hot Dance Club Songs chart and the UK Dance Singles Chart. Kelis' neo soul-inspired sixth studio album Food (2014) became her fourth top-ten album in the UK and her second top-ten entry on the US Billboard 200, where it charted at number 6. Produced entirely by Kelis and Dave Sitek, it was praised for its cohesive sound and introspective lyrical content. The album spawned three singles: "Jerk Ribs", "Rumble" and "Friday Fish Fry".Kelis has been recognized at the Brit Awards, Q Awards, NME Awards, and Grammy Awards ceremonies. Her musical output, both as a lead and featured artist, encompasses various genres. She has collaborated with R&B and hip hop acts including Busta Rhymes and Clipse; electronic and dance producers such as Calvin Harris, Timo Maas, and Richard X; pop and rock acts Enrique Iglesias and No Doubt; and indie and alternative musicians including Björk and Dave Sitek. She has sold six million records worldwide and has had particular success in the United Kingdom, where ten of her singles have peaked within the top ten of the UK Singles Chart.

The singer said last week that she did not grant permission for an element of her 2003 hit to be reproduced on 'Renaissance' track 'Energy' The post Kelis “happy” Beyoncé removed ‘Milkshake’ interpolation from ‘Renaissance’ track: “I won” appeared first on NME.

Following word that Beyoncé removed an interpolation of Kelis’ 2003 hit “Milkshake” from her new song “Energy,” the latter has addressed the development.

Kelis Snaps Back at Beyhive Teasing Over Removal of ‘Milkshake’ Interpolation: ‘Nobody Cried’

Kelis had a simple message for the Hive: "I said what needed to be said. #iwin."

Throughout her seventh album's rollout, Bey has encountered a number of bumps along the way.

An interpolation of “Milkshake” has been pulled from Beyoncé’s "Energy" after Kelis spoke out about not being contacted during the writing process.

Beyoncé has removed the interpolation of Kelis' 2003 hit "Milkshake" from her Renaissance track "Energy" on Tidal and Apple.

Does Kelis Have a Legal Standing in Beef Over Beyoncé’s ‘Milkshake’ Interpolation?

"To bring a copyright claim, you have to own a copyright,” an expert tells Billboard.

Kelis Has Much More to Say About Beyoncé’s ‘Renaissance’ Sampling: ‘I’m Coming For What’s Mine and I Want Reparations’

The singer said it's not about the sample, it's about "hypocrisy and a lot of nonsense."

Kelis Says She Wasn’t Told About Beyoncé Sampling Her Song on ‘Renaissance’: ‘It’s Not a Collab, It’s Theft’

"I heard about this the same way everyone else did," Kelis wrote on Instagram.

Kelis claims she was sampled on Beyoncé’s ‘RENAISSANCE’ without permission

'RENAISSANCE' track 'Energy' samples Kelis' 2000 song 'Get Along With You' The post Kelis claims she was sampled on Beyoncé’s ‘RENAISSANCE’ without permission appeared first on NME.

Beyoncé’s song “Energy” from her new album 'Renaissance' will feature a sample of a Kelis track, but the latter has suggested she had no idea about it.

“I got to work on a song with the good folks from Daily Harvest with a message that means a lot to me personally,” Kelis shared.

The photographer passed away after a battle with cancer The post Kelis’ husband Mike Mora has died, aged 37 appeared first on NME.

"We would ask all to respect Kelis and her family's privacy as of right now," says Kelis' rep.

Kelis’ Husband Mike Mora Passes Away From Stomach Cancer at 37

Photographer Mike Mora died at 37 years old after battling stage 4 stomach cancer. He and Kelis had two children together, a boy and a girl.

Mora, a photographer, married Kelis in 2014 and had two children with the singer

Could a follow-up to her last album, 2014's 'Food', be on the cards? The post Listen to Kelis’ first single in seven years, ‘Midnight Snacks’ appeared first on NME.

Camp Bestival 2021 set to “go ahead as planned”

For the Feb. 23 edition, RCA signee Foushee taps her favorites SZA, Lauryn Hill and Kelis for her "Bold & Beautiful" playlist.

Deal With It (feat. Kelis) [Remixes]

4th Of July - The Remixes Remixed

4th Of July - The Remixes