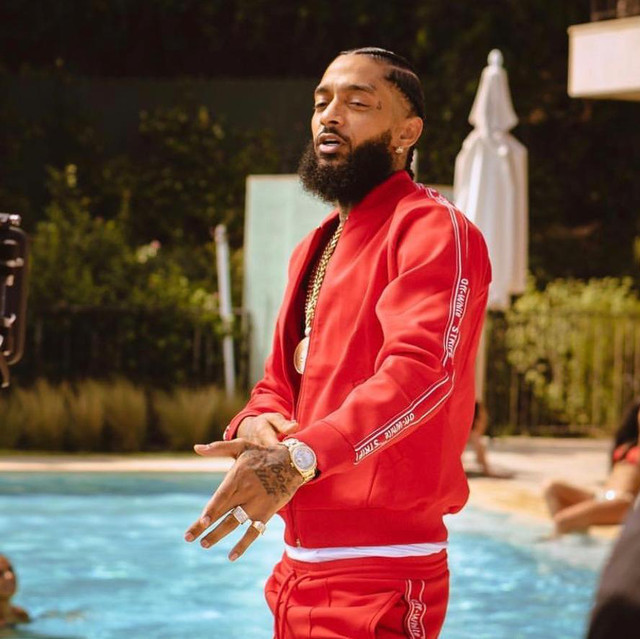 Hussle became known for his numerous mixtapes, including his Bullets Ain't Got No Name series, The Marathon, The Marathon Continues, and Crenshaw, the last of which American rapper Jay-Z bought 100 copies for $100 each. After much delay, his debut studio album Victory Lap was released in 2018 to critical acclaim and commercial success, and was nominated for the Best Rap Album at the 61st Grammy Awards in 2019. Two posthumous Grammy Awards for the songs "Racks in the Middle" and "Higher" were awarded to Hussle in the Best Rap Performance and Best Rap/Sung Performance categories, respectively, the next year at the 62nd Grammy Awards.Also known for his entrepreneurship, Hussle inaugurated the Marathon Clothing store, which he founded along with partners Carless, the head of the agency, Karen Civil, and his brother Samiel Asghedom in 2017, and started a co-working environment which he named "Vector 90". On March 31, 2019, Hussle was fatally shot outside his store in South Los Angeles. Eric Holder, a 29-year-old man who confronted Hussle earlier that day, was arrested and charged with murder two days later. Holder was found guilty of first-degree murder on July 6, 2022.

Nipsey Hussle Gets Star on Hollywood Walk of Fame

"[Nipsey] will never be gone in my heart," his grandmother said yesterday (August 15). "He lives forever" The post Nipsey Hussle posthumously receives star on Hollywood Walk of Fame appeared first on NME.

Rapper Nipsey Hussle is posthumously awarded a star on the Hollywood Walk of Fame, for his contributions to music and his philanthropic work.

‘You’ve Been a Star’: Late Nipsey Hussle Honored with Walk of Fame Star

Monday would have been the late rapper's 37th birthday

Nipsey's birthday was the subject of a proclamation from Los Angeles making the date Nipsey Hussle Day. Nip also received a posthumous Walk of Fame star.

Nipsey Hussle was originally credited on The Game's "World Tours" record, which was ultimately removed from his 'Drillmatic: Heart vs. Mind' album.

Girl Generation reunites and celebrates their 15th anniversary, Megan Thee Stallion will drop a surprise album, Lizzo gets mistaken for Precious, Nipsey Hussle will be remembered on the Hollywood walk of fame and more!

Over the past week, local leaders in South Los Angeles unveiled the new Hyde Park Metro Station, which is dedicated to late rapper Nipsey Hussle.

The late rapper was first nominated for the honour last year The post Nipsey Hussle to receive Hollywood Walk of Fame star next week appeared first on NME.

Three years after Grammy-winning rapper, visionary entrepreneur and hometown hero Nipsey Hussle was gunned down in […]

The Los Angeles rapper was killed by Eric R. Holder Jr. in front of his Marathon Clothing store in Los Angeles in March of 2019

On Wednesday a jury delivered its guilty verdict in the trial of Eric R. Holder Jr., the man accused of murdering Nipsey Hussle in L.A. in 2019.

"Here you have Nipsey Hussle, who is a successful artist from the same neighborhood, [and] Mr. Holder, who is an unsuccessful rap artist," prosecutor John McKinney said

Closing arguments are set to begin Thursday in the trial of Eric Ronald Holder Jr., who is charged with first-degree murder in Hussle’s killing.

Eric Holder Jr. sat at the defense table with an obviously swollen left eye and three staples in his head after he was "beaten" in jail before the final day of testimony at his murder trial

Eric Holder was reportedly "attacked by two inmates and beaten" while in custody The post Man accused of murdering Nipsey Hussle reportedly assaulted in jail appeared first on NME.

The man who is accused of murdering Nipsey Hussle in 2019 was reportedly physically assaulted in custody and rendered unable to attend his trial on Tuesday.

Eric Holder, 32, was seriously injured in the some point after he left a Los Angeles courtroom around 4 p.m. Monday, the source said

The taboo against “snitching” has pervaded every part of the trial of Eric Holder, who is charged with first-degree murder in the rapper's 2019 death.

The woman who drove the man charged with the murder of Nipsey Hussle testified in court on Monday and said she unknowingly became the getaway driver.

Key Witness in Nipsey Hussle Killing Is Pressed Over Errors

Bryannita Nicholson testified Monday that she had no idea her friend Eric Holder knew Hussle when they happened upon the hip-hop star.

“I heard [the volley of shots], and then I saw Nipsey fall,” Shermi Villaneuva said in court

Roddy Ricch Pays Homage to Juice WRLD, Nipsey Hussle, and More at Something in the Water Festival

On the day of his Something in the Water festival performance, Roddy Ricch also revealed he's got an EP coming imminently titled 'The Big 3.'

Defendant Eric Ronald Holder Jr. concedes that he shot Hussle but pleads not guilty to all charges The post Trial into murder of Nipsey Hussle opens appeared first on NME.

Attorneys have spent nearly two weeks choosing a jury, and the trial is expected to last about two more weeks.

Been Down (feat. Swizz Beatz)

Foundation of a Man

Down as a Great (feat. Kirko Bangz)

Be Here for a While (feat. Vernardo)

If U Were Mine (feat. James Fauntleroy)

Count up That Loot

I Need That (feat. Dom Kennedy)

Bullets Ain't Got No Name Vol. 1

Bullets Ain't Got No Name Vol. 2

Hussle in the House

They Roll (feat. The Game)

Hussle Is My Last Name

Bullets Aint Got No Name Vol. 3

Bullets Aint Got No Name Vol.1

Bullets Aint Got No Name Vol.2

Bullets Ain't Got No Names

Hussle In The House