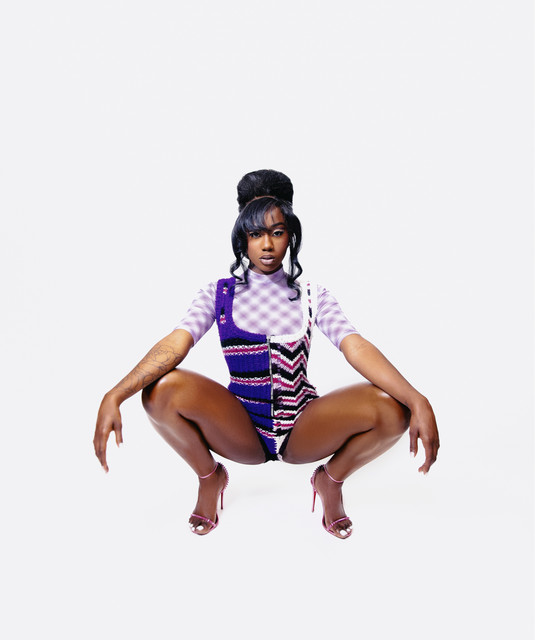 Tamia Monique Carter (born January 9, 2000), known professionally as Flo Milli, is an American rapper. She rose to prominence after her songs "Beef FloMix" and "In the Party", went viral on the social media platform TikTok, eventually leading them to be certified gold by the Recording Industry Association of America. Afterwards she signed a recording deal with RCA Records.

Flo Milli released her debut mixtape, Ho, Why Is You Here? (2020), to critical acclaim. The mixtape earned an entry on the Billboard 200, and was placed on the list of the '200 Greatest Hip Hop Albums of All Time' by Rolling Stone (2022). She was also nominated for Best New Artist at the 2020 BET Hip Hop Awards. In July 2022, she released her debut album You Still Here, Ho?.

Ahead of the release of their upcoming fourth studio album 'SremmLife 4,' Swae Lee and Slim Jxmmy enlist Flo Milli for their new single "Community D**k."

Listen to 10 new must-hear songs from emerging R&B and hip-hop artists like Central Cee, Flo Milli and Montell Fish, all released within the past week.

Flo Milli Slaughters All You Peasants On ‘You Still Here, Ho?’

Everything about the Alabama rapper's debut is ultrafeminine, shamelessly exhibitionist, and relentlessly on the come up.

No One Talks Shit Like Flo Milli on “Big Steppa”

On the highlight from her debut album You Still Here, Ho?, the Alabama rapper flaunts it.

'You Still Here, Ho?' is available to buy and stream now The post Flo Milli surprises fans with early release of her debut album appeared first on NME.

Listen to Flo Milli’s “No Face”: The Ones

The new album is on the way soon The post Flo Milli reveals album release date and shares new song, ‘No Face’ appeared first on NME.

Listen to 10 new must-hear songs from emerging R&B and hip-hop artists like Westside Boogie, SleazyWorld Go and Kent Jamz, all released within the past week.

Flo Milli is feeling herself on feisty new track ‘Conceited’

It comes alongside news of the rapper's debut album, 'You Still Here, Ho?' The post Flo Milli is feeling herself on feisty new track ‘Conceited’ appeared first on NME.

Monaleo has dropped off the music video for her "We Not Humping (Remix)," featuring Flo Milli. Monaleo released the song's original version in December.

In tandem with the release of her new EP '4Ever Sossa,' up-and-coming Houston rapper Sally Sossa taps Flo Milli for her new music video "Toot It Up."

Flo Milli is the ultimate girl’s girl. After her childhood all-female rap group Pink Mafia (formerly known as Real & Beautiful) broke up, she made a new name for herself and released her debut EP Ho, why is you here ? in 2020, which earned her a coveted spot on XXL’s 2021 Freshman List. Her […]

The charismatic and confident Alabama-born rapper performs her latest single, ‘Pretty Girls’ on the Honda Stage.

Flo Milli on Missy Elliott: ‘I See Her Influence Everywhere’

"'She's a Bitch' is my favorite. If it came out today it would still be just as hot as it was back then. They’re calling her a bitch, but she don’t care."

Listen to 10 new must-hear songs from emerging R&B and hip-hop artists like Flo Milli, 22Gz and Buddy, all released within the last two weeks.

Watch the full-length documentary from Honda Backstage that explores Flo Milli’s artistic journey and how she kept believing in herself until everyone else did too.

Rico Nasty caught up with Billboard to talk about her latest single, "Money," featuring Flo Milli, dealing with hecklers on tour, and balancing her career with motherhood.

The pair have been teasing the track for several weeks The post Listen to Rico Nasty and Flo Milli’s collaborative new single ‘Money’ appeared first on NME.

"The reason I'm different, I do what you don't. You do what you can and I do what I want" The post Listen to Flo Milli’s new single ‘Ice Baby’ appeared first on NME.

Rubi Rose, Pooh Shiesty, Flo Milli and 42 Dugg speak on their 2021 XXL Freshman experience, musical influences and what they bring to the rap game. Continue reading…

We Not Humping (Remix)

Toot It Up (with Flo Milli)

Blast Off (feat. Akbar V) [from the "Bruised" Soundtrack]